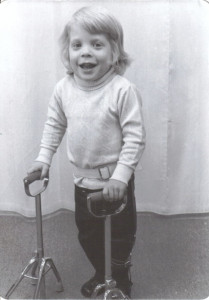 “If he lives, you’ll be fortunate,” a physician told Randy Kramer, 21 and in the Air Force, and his wife, Linda, just 18. It was an era before medical technology could do much to save small-weight infants. Steve’s weight dipped below three pounds and repeatedly he suffered breathing apnea because of underdeveloped lungs. When his heart monitor stopped, a nurse vigorously tugged on a string tied to his leg to jostle the boy into breathing again.

Those touch-and-go early days also put a strain on Randy and Linda, who lived in Arizona. They were visiting Linda’s parents in Placerville, Calif., when she went into premature labor. The closest hospital that would treat preemies was in Sacramento, and for the first two months they had to make a 100-mile round trip to see their son in a hospital incubator.

When Steve turned 6 months old, the family moved to the Azores, a group of islands 800 miles west of the coast of Portugal. The parents grew concerned when their 9-month-old baby couldn’t sit up and had difficulty grasping toys.

The mounting pressures of marrying young Linda had been 16, Randy 19 – the growing medical concerns over Steve and the rigorous military life took a toll on the Kramers. The couple separated for 6 months and contemplated divorce.

But a trip to a U.S. military hospital in West Germany unified them. Upon hearing physicians diagnose his son with cerebral palsy, Randy, who had been raised in a strong Christian home, recommitted his life to Christ and thus preserved the marriage. Doctors told the Kramers that their son would never walk.

From that point on, the Kramers stuck together.

Steve’s parents always included him in family activities. They let him go at his own pace, which resulted in him becoming more independent-minded. And Steve didn’t set limits on himself.

“My family never treated me like I was disabled,” Kramer says. “My parents knew that the limitations others set on me weren’t what God planned. God knew before I was born what purposes He had for me. God doesn’t look at the doctor’s chart before He calls you.”

Today, Kramer is one of 764,000 people in the United States with cerebral palsy. Usually the condition is caused by brain damage during fetal development, affecting a person’s ability to adequately control body movement and muscle coordination.

But overcoming difficulties has been something Kramer has done with great regularity. In fact, his impressive career almost makes it seem as though he had been born with a silver spoon in his mouth. The handsome, articulate, good-natured, extroverted young man has pursued and realized his dreams of becoming a television news anchor, associate pastor and now, itinerating missionary.

Certainly an upbeat attitude and stick-to-itiveness have contributed to his achievements. But more importantly, Kramer’s faith in Christ has helped him accomplish goals rather than despair about limitations he faces.

The Kramers returned to California just after Steve’s first birthday. By age 13, Steve had undergone a dozen surgeries on his legs, knees and hips in attempts to loosen stiff spastic muscles. Sometimes he would be in a body cast up to his chest, hospitalized for months at a time. At night his legs would be in splints. 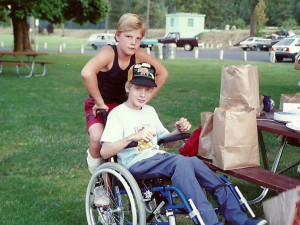 When it came time for Steve to enter school he and his parents had a new battle to fight: prejudice. His parents vociferously, and ultimately successfully, argued for Steve’s inclusion in a public school program. Steve’s teacher, counselor and superintendent had all sought to place him in a school for the disabled. Because of the cerebral palsy, Steve’s movements appeared uncoordinated, prompting classmates to tease him cruelly and even throw rocks at him. Unlike God, people often tend to judge mental capacity by physical appearance. Steve did need to repeat kindergarten, but it was primarily because he spent most of the first year in hospital rooms rather than the classroom.

Steve lived most of his childhood in a wheelchair, on crutches or using a walker. After completing intensive and painful physical therapy, he would improve only to face another operation which doctors deemed necessary.

Although Steve committed his life to Jesus as his Savior at age 5, four years later he felt overwhelmed as to why God allowed his pain and suffering. “My dad told me, You can know God is good, whatever you go through,’ ” Steve recalls. “That has been the foundation of my life.”

His parents were a constant encouragement. “I would never trade a bad set of legs for a bad set of parents,” Steve says. “God has always blessed me with incredible favor even in the face of seemingly insurmountable odds.”

“It’s always been amazing to me that Steve did not become embittered,” Randy says. “Instead of getting angry at God when bad things happen, he has allowed the Lord to build his character.”

The Kramers ultimately found the operations to be more experimental than helpful. When Steve was 13, he had a wedge removed from his left femur and replaced by a steel plate. Immediately afterwards, medical specialists told the family that Steve needed a similar operation on the right femur or he would never walk. At this point Steve’s parents allowed their son to make a life-changing decision.

Steve had recently sensed a specific call by God to become a missionary to the Netherlands. He believes that sense of divine leading helped him focus on a difficult choice. “I believe God knew I would need it to carry me through the tough times,” he now recalls. At 13, Steve determined he would consent to no more operations.

Randy asked members of Highland Assembly of God in Bakersfield (now Canyon Hills Assembly) to pray for a healing so that yet another corrective surgery wouldn’t be necessary.

Six weeks later, X-rays revealed that the right femur had returned to its socket. Doctors couldn’t account for the reason.

“One of my regrets is that I should have prayed more instead of automatically conceding to surgeries,” says Randy, whose faith increased from that point. He went to Bible college and spent 15 years as a pastor.

Soon after the femur healing, the Kramers were at the beach and a giant wave came ashore. The receding water washed Steve’s crutches out to the ocean, never to be seen again. Steve saw it as divine intervention. Since then he has walked on his own ability.

Kramer lives independently, but he isn’t against practical help. “A shoe lift didn’t come out with me when I was born,” he says. And there are limitations. He becomes fatigued after a mile of walking. Stairs are difficult to negotiate because of trying to keep his balance.

“I am disabled,” says Kramer. “It’s noticeable when I look into a full-length mirror. But God can be glorified through weaknesses.”

Kramer graduated from the University of Oregon with a broadcast journalism degree. He served sports reporting internships for NBC affiliates in Yuma, Ariz.; Eugene, Ore.; and Seattle.

God then opened doors full-time in television, a medium not known for welcoming the physically disabled. Kramer spent two years as a news anchor for the CBS affiliate in Coos Bay, Ore.

Kramer had hoped to become a professional sports announcer, but his desires were changing. He saw how much ministry transformed his father’s life.

When Kramer heard David Lee, then-director of International Media Ministries, speak at a church missions convention, he felt God calling him again to missions. At Lee’s invitation, Kramer left a promising future in television news and went to work for IMM in Belgium for 15 months. He wrote scripts and narrated videos for IMM. In his spare time he ministered to refugees and homeless people in Brussels.

“In spite of his training in the TV and radio profession, Steve’s number one passion has always been evangelism,” says Lee, now U.S. Relations director for Assemblies of God World Missions. “He is bold about sharing the gospel one-on-one on the streets.”

After his stint with IMM, Kramer moved to Springfield, Mo., where he graduated from Assemblies of God Theological Seminary with a master’s degree in theological studies in 2002. His thesis, based on Philippians 1:29, explored how suffering can be a gift from God.

Kramer served as associate pastor for a year and a half at Abundant Life Assembly of God in North Salt Lake City, Utah.

“Steve has a real good heart for starting ministries that most people don’t really care about,” says Abundant Life Pastor Alex Lucero. “He started helping at a rescue mission here and passed that ministry on to someone else when he left.”

Kramer is now based in Jefferson, Ore., where his parents live. The Kramers have three younger children, all born without complications.

“I always saw great potential in Steve,” says Linda, a county sheriff’s correctional sergeant. “We never wanted him to think he couldn’t do anything, mentally or physically, that he set his heart to do. Other people see that he’s disabled. We don’t see that.” Linda Kramer went to college, even though she never finished high school.

In April, Kramer received approval to become an Assemblies of God world missionary. He is currently itinerating in preparation to work with Chi Alpha and church planters in Amsterdam next year.

“Steve will find a place where there is a real need and that’s what will drive him,” says Lucero, who has been pastor of Abundant Life for 16 years.

Already, Kramer has led three Chi Alpha short-term teams to the Netherlands. Being robbed at knifepoint the first week of his first visit didn’t deter him.

“I’m the last guy who should be leading a street evangelism team through the red-light district,” Kramer says. “I walk half the speed of everybody else.”

Greg Mundis, Europe regional director for Assemblies of God World Missions, recognizes that Kramer takes longer to do some tasks but says that’s not a problem.

“Steve has exhibited an incredible amount of tenacity in the face of obstacles,” Mundis says. “He demonstrates a positive attitude in facing the challenges of life that most don’t experience. He will bring a dimension into his missionary career that few of us have because he knows what it means to endure.”

Mundis finds it especially fitting that Kramer will be living in Holland, which in 2001 became the world’s first country to legalize euthanasia, in part as “mercy killing” for the disabled. “That will provide an added dimension to what Steve can contribute to that society,” Mundis says.

Kramer works out regularly in a gym and believes he’s in the best physical shape of his life.

“But if I have to go back into a wheelchair someday it won’t dampen my testimony,” he says. “The eternal things are more important.”